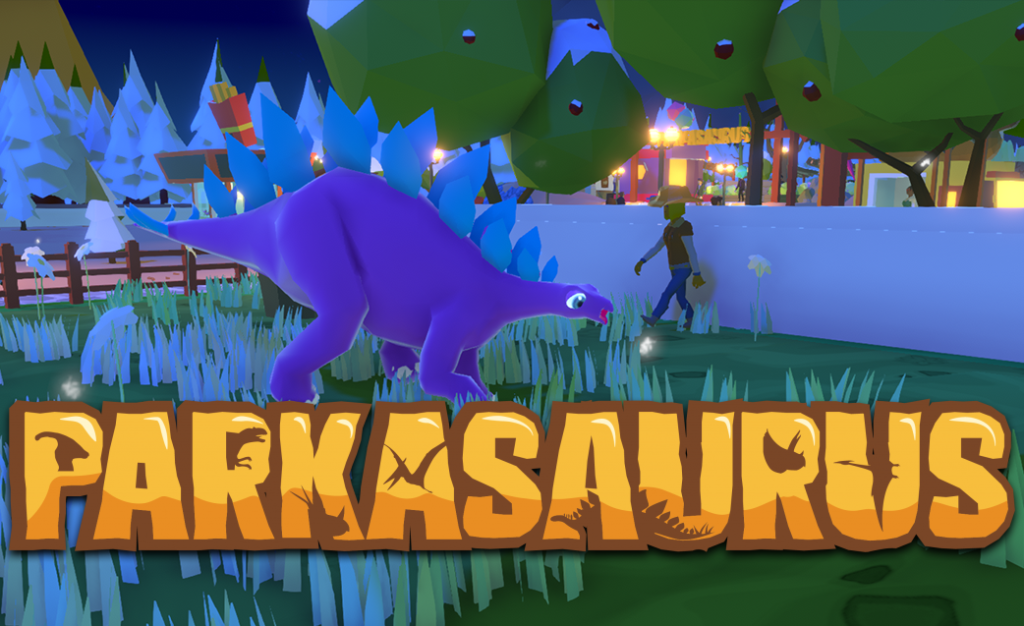 If you’re looking to relive some of that age-old “Zoo Tycoon” nostalgia, you should start with “Parkasaurus” by Washbear Studio.

This charming dinosaur park simulator is easy to pick up, although some of its progression systems feel redundant during extended play. If it will continue to hold players, it also needs to double-down on what makes each park feel distinct.

Warning: This game is in early access/alpha on Steam, but the two (2) devs are both heavily engaged with their community and actively working on a large list of future features.

Check it out on Steam!

Dinosaurs crash landed on Earth, and they want you to build a dinosaur zoo with them. For science. And shiny human money.

To make money, you need to meet a variety of demands. The most important part is making sure your dinosaurs’ needs are sufficiently met. Happy dinosaurs excite your guests. In turn, this means bigger donations to your park and more foot traffic.

The second dynamic is ensuring your guests are fed, energized, and excited. But let’s start with the cool part: making our dino pals happy.

There’s also a huge selection of dinosaurs to research and mature within your park. Clicking on a dinosaur reveals a popup with three tabs: Care, Info, and Privacy. These tell you everything you need to make your dinosaur happy.

The Info tab gives you useful information like dietary needs (vegetables vs. meat so far), sex, biome needs, and other cool data. The last tab, Privacy, shows all of the elements detracting from the Privacy need on the Care panel.

When Dinos Suffer, Prepare for Jurassic Park. The Bad Version.

If your dinosaurs go too long without being fed, or if their biome doesn’t meet their needs, or if you just accidentally delete some fence, prepare for some park cleanup.

Highly aggressive dinosaurs (an attribute shown on the Info tab) will wreak havoc, destroying structures and decorations, and killing guests or other dinosaurs. Also under Info, you’ll see a count of the number of guests and other dinos your little maniac has rekt.

The game uses ragdoll physics to throw around clutter and bodies, although there’s no gore (family friendly!). You will, however, have to hire Janitors to repair your buildings.

Guests also have many needs. Clicking on a guest shows a similar set of tabs and data, including the usual suspects like hunger, energy, entertainment, fun, how beautiful their surroundings are, and how badly they have to take a whiz.

The solutions to these are mostly straightforward. You’ll build food kiosks of varying types (which also each have their own settings) to feed your guests, bathrooms and benches, bushes and statues, and so on.

You can also see their favorite dinosaur (say, a stegosaurus), as well as their temperament (relaxed, quiet, fearful, etc.). If you pretty much just follow your gut on where you would logically like things in a real park, none of this much impacts your park success. However, if you find yourself low on money, you can always check to make sure your guests’ needs are being met–happy guests are spending guests.

Overall, the gameplay is straightforward and simple to pick up. The game runs on a day-to-day basis: the game day begins, your staff and guests stream out through the park, doing their jobs and spending money, and your park closes at the end of the night.

This feels a little more realistic and rewarding than other simulator games, like “SimCity” or “Roller Coaster Tycoon.” While any money you spend throughout the day automatically comes out of your funds, you must wait for the end of the business day to collect money from your donation boxes, concessions, and entry fees.

The day-by-day system gives a sense of progress and grounding that I actually found more engaging than just sliding 24/7 through the hours. It also adds to the addictive play nature of the game. I find myself frequently thinking, “Just one more day.” And then another. It gets hard to figuratively call it a day on “Parkasaurus.”

Besides building and maintaining your park, you also have some neat little areas to handle backend management. These extra tasks, while not fully implemented in the alpha, add some much needed complexity, although they don’t quite fill the void completely.

First, there’s your office–although not fully implemented yet (alpha), you can sort through resumes of job applicants, look at your park metrics, and access some other neat information.

Second, you can go to “town” to pick up groceries (I guess dinosaur-sized cabbage helpings are common in this alternate world), birth dinosaur eggs (from chickens?), and buy cute little hats to place on your dinos (current build suffers from poor model scaling).

And third, you can send your Scientists into portals to other timelines, dimensions, time periods, or who-knows-what. While I don’t really get the science of what’s happening here, essentially you open a portal to a period where a specific dinosaur thrived, send in your Scientists, and use their varying potencies to dig for fossils in something similar to “Minesweeper.” You use these fossils, in conjunction with gems you buy from town, to make chickens poop out fresh dinosaur eggs. It’s a neat little mini-game that has a couple different rewards, and it helps to break up gameplay.

Although digging fossils and collecting eggs feels fun, it gets a little weird as you unlock more dinosaur families and struggle to dig up exactly the fossils you need to get the egg you want. Also, purchasing gems at the town gem store feels like an unnecessary step to make eggs.

There are a couple parallel progression systems that feel great on the first playthrough. However, these feel repetitive in later sessions since you can complete everything in one park.

There also is a slight sense of customization: you can recolor structures, name your dinosaurs and exhibits, and influence dinosaur colors before they hatch.

The game is obviously still in alpha and the devs have their own list of features to finish. But for discussion’s sake, locking parks out of certain progression paths on these trees, limiting dinosaur families from park to park, and offering ways of specializing your park based on types of dinosaurs could help create reasons to try new parks.

While it may come off to some as lacking, I really felt it had this sense of childlike wonder to it, similar to the first time I booted up “Minecraft” or “Planet Coaster.”

The UI has a kind of flat, vibrant design that relies on broad symbols and shapes reminiscent of Web 2.0 design. It tells you everything you need to know, little that you don’t, and does it clearly.

Lastly, and not to be missed, the various dinosaur NPCs during the tutorial (and during quest dialog) have this kind of zany, silly view of humans, and a disregard for the ridiculous nature of the entire game. In contrast to huge modern focus on gritty, andrenaline-fueled video games, “Parkasaurus” shines as a sigh of relief after a long day at work.

Finally, just a quick note on an aspect of games that is rarely discussed but intimately felt: community engagement. Let me just reinforce that this pretty thorough game is only in Early Access, designed by just two (2) developers. They can be reached AMA style on their Tumblr and actively through their Discord channel. They seem to post weekly on their Twitter and about as frequently on their Facebook page. And, of course, there’s their Steam Community Hub, where you can also find news and updates.

Hatching and raising dinosuars is fun and well-realized, but some gameplay systems feel unnecessary, and "Parkasaurus" doesn't seem to bring anything novel to the park sim table aside from hats. Its charming, whimsical style helps set it apart with a simple, positive atmosphere. There's room for more design work that makes each new park feel distinct from other player sessions. (Game is still in Early Access on Steam.)